Every year on September 11, Ethiopians celebrate their New Year. The holiday is called “Enkutatash,” which literary means the “gift of jewels.” This naming came from the legendary visit of the Ethiopian Queen Sheba to that of King Solomon of Jerusalem back in 98 BC. During her visit, this famous queen of Ethiopia brought the king a collection of “jewels.” Upon her return home, the queen was restocked with a new supply of “enku” (jewels) for her treasury.

Ethiopians called the New Year “Enkutatash” because the period the queen arrived back to Ethiopia coincided with the New Year’s celebration in September. Celebrating the New Year in September, however, is originally connected to the Bible as it is the period that God created the Heavens and the Earth and so this period should be the beginning of a New Year.

In Ethiopia, the month of September is called Meskerem. It is a month Ethiopians say goodbye to the three months rainy and thunderous winter and look forward to the pleasant spring weather. It is a month that everyone will be filled with a new spirit of hope for the New Year.

Many cultural and religious performances take place during the New Year among, which is a cultural song called “abebayehosh.” On New Year’s Day, there is a traditional performance where girls approach homes in their neighborhoods singing, clapping, and beating their drums. One girl among the group leads the song chanting the verses, whereas the rest follow the lyrics by saying “lemlem.” The word “lemlem” means “lush green” to indicate the coming of September. Girls wear either one of their favorite dresses or a new cultural dress if they get one. They also hold “adey abeba,” a yellow flower. This flower is unique to Ethiopia and grows between September and October. For foreigners flying to Ethiopia during this season, the adey abeba spread over the fields of Ethiopia is an eye-catching sight!

Homes visited by girls singing will reward the girls with money or pieces of holiday bread called “Defo Dabo.” In the old days, people used to give bread only, but now and more so in the cities, it has become common to give money instead. After receiving the gift, girls will sing again praising the head of the house and the family they visited. Among the praises include “Let us find you richer when we return next year, and let us find you blessed with more children when we return next year and with more cattle, etc.”

What Ethiopians do on the New Year’s Eve is also another long-existing tradition. When it gets dark, families and neighbors gather in their front yards to light “chebo” (bonfire). Everyone (men, women, girls, and boys) sing and dance around the fire warmly welcoming the New Year and delivering best wishes to one another. Young boys have a special role in preparing the bonfire, which often is not an easy task for the rainy season just ended and finding dry wood is difficult. 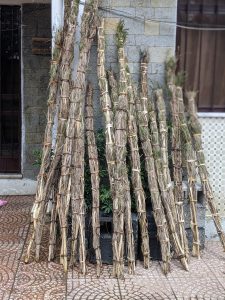 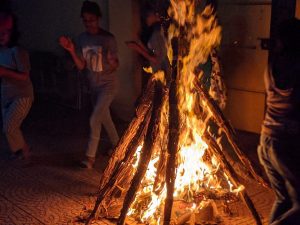 On the next day, like most of the Ethiopian holidays, the New Year is received with a feast where slaughtering of sheep is done at home. Delicious holiday dishes will be served with local drinks called “tella” and “teji.” This year’s New Year is on Saturday, September 11. The New Year’s feast begins on Saturday and continues through Sunday as it is a weekend.

Happy New Year to all of our Ethiopian friends and family!